Jill Hicks was driving to meet friends for dinner when she saw something that made her heart drop — a tiny animal scampering along the road, ready to veer into traffic. She slammed on her brakes. “I thought it was a baby bunny at first just because the fur was so fluffy,” Hicks, who lives in Chattanooga, Tennessee, told us.. “When I got closer and I realized that it was a tiny kitten.  Then I pulled over and opened my car door and left it open so that traffic would slow down. And I went toward the kitten.” 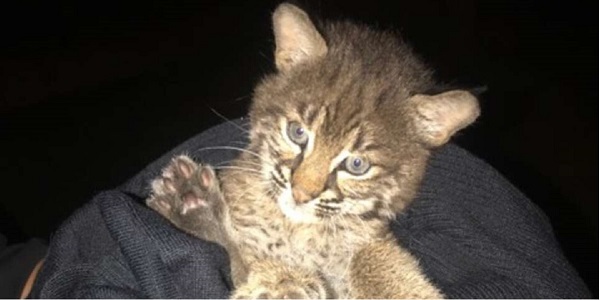 Hicks was able to grab the kitten before she ran into oncoming traffic. “I wrapped her up in a sweater that I had in the car with me, and held her close to me,” Hicks said. “I was thinking it was a kitten somebody had tossed out, so I thought there may be more. So I was calling for other cats, saying, ‘Kitty, kitty, kitty,’ thinking more kittens would come to me. But I never saw a mom or more babies.” Even if it meant being late or missing her dinner entirely, Hicks decided to drive the kitten back to her house. “I put her in the car with me, and she climbed all over me, climbed around the back of my neck, got into the passenger seat,” Hicks said. “I had to pull over a couple of times to get her situated, and I finally got her on my lap, wrapped up in the sweater, and got her calm. And I was loving on her and petting her.” 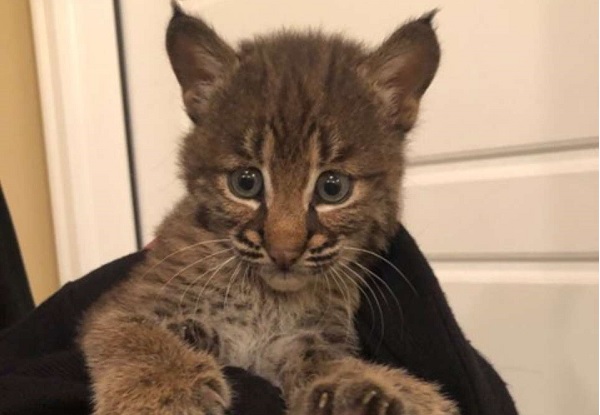 Bringing the bobcat kitten back home

Hicks has a big dog and an older cat at home, so bringing the bobcat kitten inside the house didn’t seem like a good idea. So Hicks made the kitten a comfortable spot in the garage, complete with a litter box and bowls of food and water. She also made a bed for the kitten by tucking her sweater into a cardboard box. Hicks posted a picture of the rescued kitten on Facebook along with a plea for someone to adopt her. Then she left for her dinner. When Hicks returned a couple of hours later, she planned on taking the kitten into her house (after securing her pets in another room), giving her a bath, and taking her into bed with her. But instead, Hicks got a big shock. 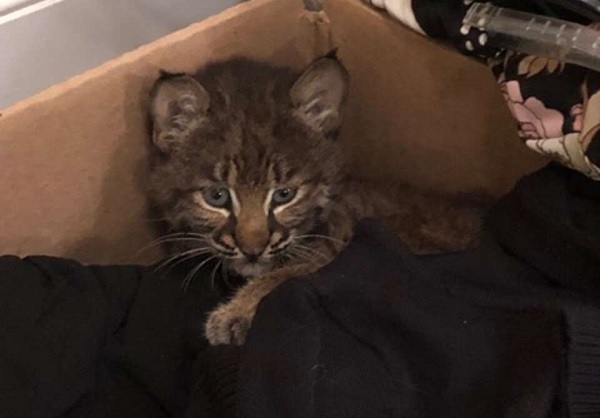 “My neighbor from across the street came running over,” Hicks said. “She said, ‘Jill, do you still have that kitten?’ And I said, ‘Yeah, I do.’ She said, ‘Can I see it? I think it might be a bobcat. Have you read all the posts on Facebook from the picture you posted?’” Hicks and her neighbor went to check on the kitten, who was hiding in the cardboard box. Hicks picked up the kitten and tried to figure out the little animal’s true identity. 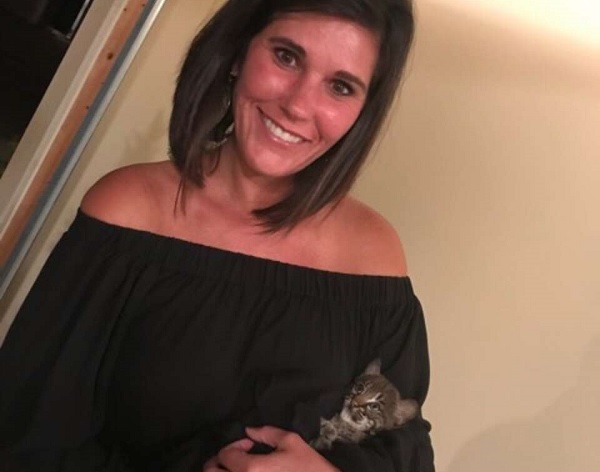 “Her tail was what gave it away,” Hicks said. “I knew she had a short tail when I first saw her, but I had not fully examined her until I got back from dinner. There are cats with short, stubby tails, but this one was a little pointy at the end and had a little white spot on it. And she had started getting a little hissy … and growling a little bit. So I said, ‘Yeah, this might be a bobcat.’ After her surprising discovery, Hicks wrote another post on Facebook. “Ok so never mind about rehoming this ‘kitten’ I found on the side of the road,” the post said. “Apparently I rescued a baby bobcat.”  Hicks knew a wild animal wouldn’t appreciate a bath and sleeping in a bed with a human — but she also didn’t want to leave the little bobcat kitten alone in the garage. So she slept in the garage with her. “I would turn the lights on about every 30 minutes and look to make sure she was good,” Hicks said. “I did get her to drink a lot of water. She never ate anything that night, but she did eat some tuna fish the next morning.” 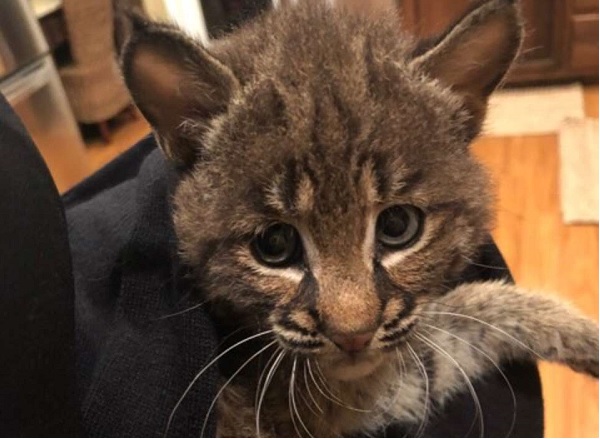 The next day, Hicks got in touch with Juniper Russo, director of For Fox Sake Wildlife Rescue.  He took the baby bobcat and estimated it to be about 7 weeks old. The bobcat turned out to be very anemic, so Russo has been helping her get strong and healthy again. 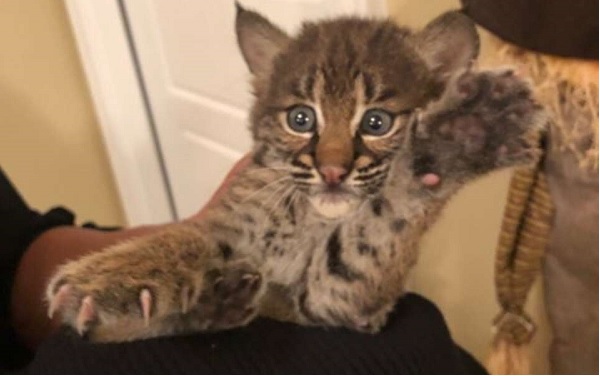 “Arwen developed anemia shortly after she arrived, probably because of multiple factors including the sudden separation from her mom,” Russo told The Dodo. “She needed a few days of intensive care but is now doing very well. I expect that she’ll need care until next spring. She will be released into a protected wilderness area when the time comes. 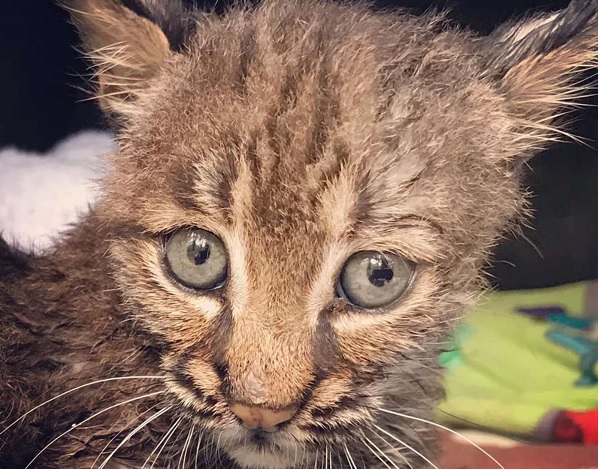 “It’s always best for baby wild animals to stay with their natural mothers whenever possible,” Russo added. “Even with the very best care, a baby animal’s best chance of survival is always with its mother. But in Arwen’s case, reuniting with her mother wasn’t an option. Because she was found near a very busy road and her den site was unknown.” In the past few days, Arwen has become more aggressive, which is a sign that she’s feeling better. In fact, the team at For Fox Sake nicknamed Arwen “Little Miss Murdermittens.” 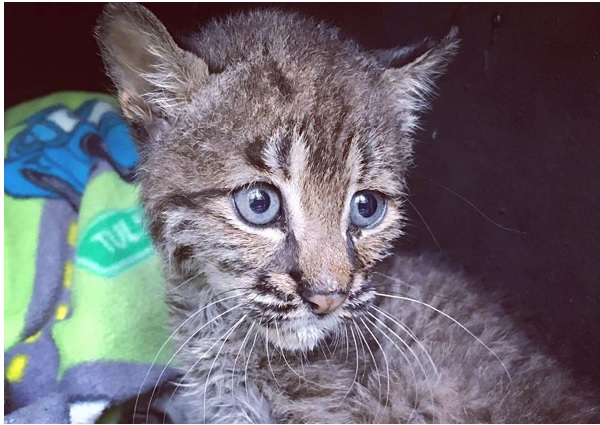 “She’s fearless and bold and has no interest in humans, which is exactly what we hope to see,” the rescue wrote on Facebook. Hicks won’t be able to see Arwen again since the rescue tries to minimize human contact with its animals. But Hicks hasn’t stopped thinking about the bobcat kitten she picked up from the road. “She stole a little piece of my heart that day, and she’ll have it forever,” Hicks said.