Not many turtles get to become social media influencers, especially ones like Hope.

The tiny, albino pink belly turtle, has more than 235,000 followers on Instagram, but more importantly, she has a condition so rare that it doesn’t even have a name.

Hope was born with her heart exposed outside of her shell. The organ, which peeks through a small hole in her stomach, can be seen beating as she swims, eats, and dives in her tank. 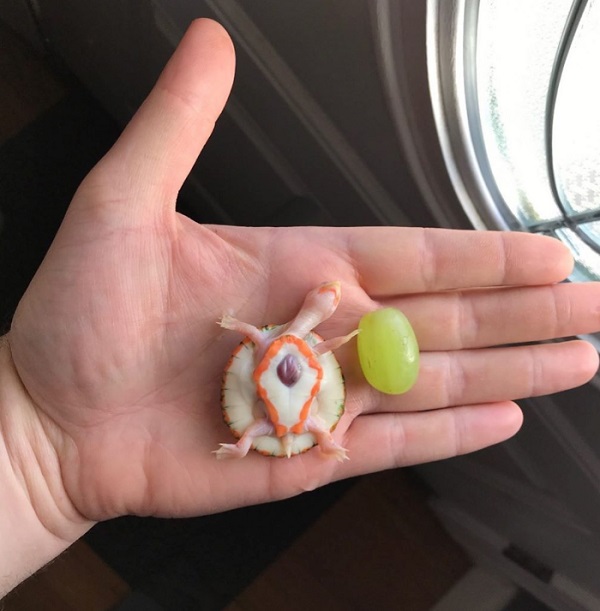 It’s an awe-inspiring phenomenon, and one that, despite its striking appearance, has not affected the turtle’s health. Michael Aquilina, Hope’s owner, said that his pet lives a healthy life.

Aquilina, 31, keeps his large Instagram following updated on that fact. He consistently posts photos of Hope to his social media page, Aquamike23, with many images showing her extraordinary condition.

Aquilina’s relationship with Hope goes far beyond photo ops, though. The 31-year-old said that he’s found a great deal of emotional support in the tiny turtle, which came into his life in late 2018.

“Hope has impacted my life in so many ways it actually makes me emotional,” he said.

More than a year later, Aquilina keeps his followers up to date on all of Hope’s progress, as she continues to progress from a young animal into a healthy, full-grown turtle.

Ultimately, Aquilina wants Hope to inspire others — which shouldn’t come as a surprise, considering what he named his turtle.

“My mission is to save animals and give them all the love that I’ve got to give. I am also here to educate people about animals as well as help spread hope to everyone who could use some,” the description of his website reads. “Treat every living thing, man, woman, child, and animal with love and respect. Every life matters no matter how big or small!”

See more about Hope in the video below, and remember to share his story with your friends to help spread Mike’s message!