Rony Ryckoort of Waregem, Belgium has had a love and a fascination for animals since he was a little boy. His absolute favorite animal of all time was the tortoise.

He first started raising European species tortoises, such as the Hermann’s tortoise and the Moorish tortoise. He began breeding these spectacular animals.

When Rony began keeping the bigger species, he bought his first adult pair of African spurred tortoises in 1990 and decided to specialize in African, species that lived in grasslands.

Even now, Rony dedicates his life to keeping and breeding African species of tortoises and teaching people all about these special animals. His main focus involves the African spurred tortoises and the pancake tortoises, both of which he has huge groups of roaming around in his ‘Tortoise room’.

The largest specimens of African spurred tortoises he has weigh about 220 pounds and are said to be more than 100 years old. 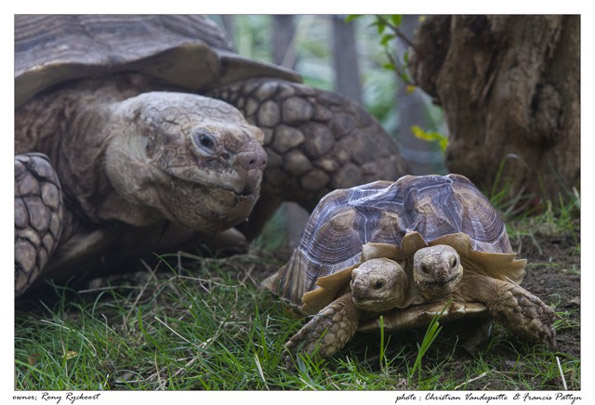 His tortoises have close to a thousand babies each year, and those are now scattered all over the world.

On May 28th of 2012 an extra special little miracle was born under Rony’s care. Weighing in at only 0.028 pounds, a two-headed baby African spurred tortoise came into the world. 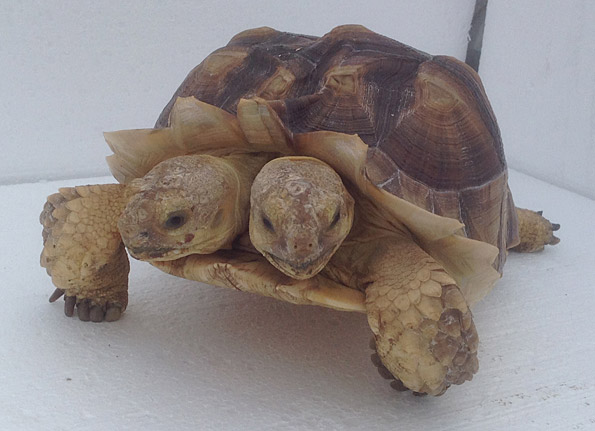 Rony named the tortoise ‘Kianga’, which is an African name that means ‘Sunshine’.

It was quite obvious to Rony that one of the two heads was more dominant than the other. It began eating a few days before the second head decided to. And even now the head on the left is the most dominant one!

Because a lot of animals born with two heads have some kind of health issues to deal with, these problems can prevent them from having a pain free and normal life. And just a few of the animals born with two heads are able to live long and healthy lives.  So, in order out if his ray of sunshine was healthy or not, he got in touch with some of Western Europe’s best reptile veterinarians and asked if they would give Kianga a close look. Most of the veterinarians came to the conclusion that the tortoise’s health was excellent and they made the decision to wait and see if the tortoise would grow, eat and generally ‘live’ like it should, before they would take any further steps.

Rony dedicated his life everyday to making sure that Kianga was taken care of in the best possible way. He even slept on the sofa for more than a year after she was born, checking on her every few hours to make sure that everything was alright. 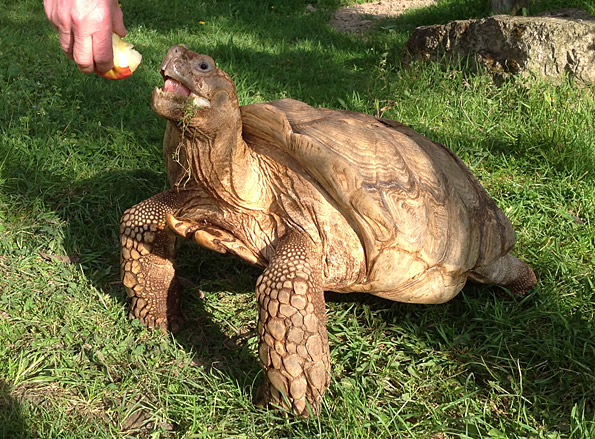 Rony decided after three years had gone by to get the vets back together to perform a whole body scan of the three-year-old, two-headed tortoise. And what the scan revealed was incredible.

The only thing that was malformed on Kianga is situated in her spinal cord, just at the end of her neck. The spinal cord has a ‘Y’-junction, which allows her to have two heads, each one with a perfectly formed brain and cervical spinal cord, two tracheas that lead to one set of normal lungs, two esophagi that lead to one normal sized stomach and one beating heart!

In a nutshell: only Kianga’s heads and necks are doubled, everything else in her body is as normal as the body of any other tortoise. And according to experts, Kianga is most likely going to live a long and happy life. With the excellent care provided her by Rony, she’ll most likely outlive him and possibly even her next caretaker! 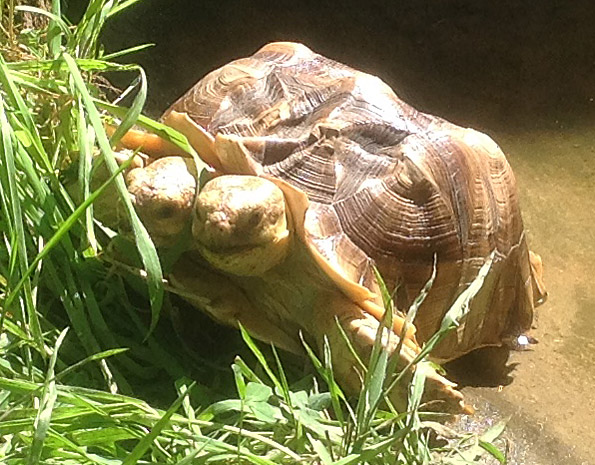 Rony’s goal is to make sure that everyone in the world see’s Kianga. He’s shown her to audiences all over Belgium and the Netherlands with some help from the H.E.R.P. (The Herpetological Education and Research Project).

This organization focuses on the education of young and old about reptiles, amphibians, and arthropods and is lead by Laura Ruysseveldt and Bryan Minne, both of whom are biologists/herpetologists and professional animal experts that specialize in herpetofauna. As a partner of this organization, Rony has been featured on the news many times too.

He’s had lots of offers from zoos and reptile parks from all over the world, who would love to get their hands on this magnificent reptile. But the love that Rony has for Kianga is much too deep to ever part with her.