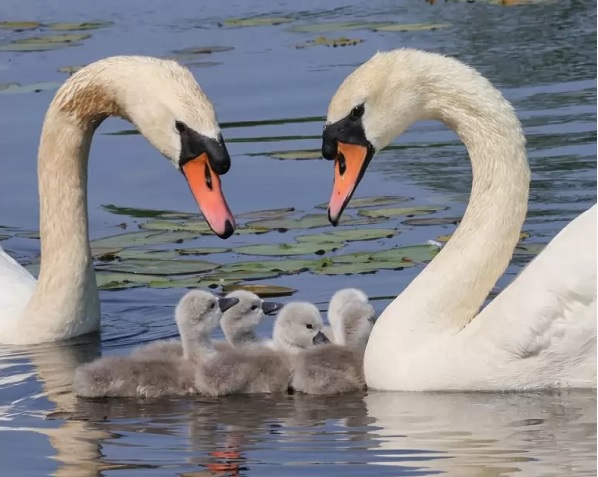 For years, there were only a few swans at the Charles River Esplanade in Boston. But one couple swan made their home among all these lagoons and ponds.

As the swans migrate north for summer, they often find places like this one lagoon as the perfect spot where it is safe and comfortable to raise their newly hatched babies.

“In early April, we first noticed they had a nest along the pillars by the lagoon,” Emma Feeney, marketing and events coordinator for the Esplanade Association told us. “Then shortly after, we saw that the female swan had begun to lay eggs. A total of nine eggs had been laid by early May, and about 10 days ago the cygnets began hatching.”

Baby swans made their debut on the Esplanade this week and we cannot get over the pure cuteness of the newly hatched cygnets! Enjoy a collection of photos of our Espla-swan family from @NBC10Boston at https://t.co/jlEqXJb4fE

All birds and wildlife lovers gathered around the nest to watch as seven cygnets hatched, then were cared for by their doting parents.

“They’ve kind of become celebrities in Boston over the past few weeks,” Feeney said.

Welcoming the weekend with these stunning shots of the Esplanade’s adorable swan squad! 🦢🐣🌊

Share your name suggestions for the newly hatched cygnets below! ⬇️

Even after the hatching of eggs, people still loved to keep up with these swans. They usually mate for life and both parents were doing an awesome job sharing this new responsibility!

Unfortunately, it wasn’t to last. The mother swan soon became sick. Within days she had passed away.

Sylvia J. Zarco was on the banks of the Charles River that night when she noticed something wrong with the mom swan.

“She was resting, sheltering her cygnets like the great mom she’s been for the past week. But she couldn’t lift and hold up her head. She stumbled when she stood, couldn’t swim straight and whatever she did, she only propelled herself backward,” Zarco wrote on Facebook.

“Animal Care and Control received a call with concerns over the female swan’s health, as she seemed to have been bobbing her head and couldn’t stand up on her own,” Feeney said. “But by the time animal control arrived at the park, unfortunately, the female swan had passed.”

The city of Boston’s veterinarian couldn’t determine the cause of death for the wild mother swan.

“The swan’s death broke many of the hearts of the community here in Boston, where we see people visiting the swans’ nest on a daily basis — it’s become part of their daily routine,” Feeney said.

It was a heartwarming moment for the people of Boston who had been keeping up with this event, but now all eyes turned to dad.

As soon as his partner passed, the father swan took up his dutiful responsibility. Despite the hardships of finding food and protecting his baby swan, he was doing an amazing job. He would sleep with them all under his wings, just like their mother used to do.

“They seem to be doing well,” Feeney said. “You can spot them in the esplanade lagoon swimming together, with some of the babies riding along on his back.”

Like any good dad, he’s a bit protective over his kids especially when it comes to strangers!

“Geese will swim by them and you can tell that the papa swan is in full force, protecting the cygnets,” She added. “You can tell that he’s just a great, great father to them. It’s very adorable.”

It’s been a crazy 24 hours. So happy to have played a small role in this heartwarming story about Boston’s Papa Swan. Yes, I am actually taking photos here because Papa Swan *made an appearance* during the interview! https://t.co/i6djyYa4J6

Thank goodness for their caring dad, the seven cygnets will have an excellent chance at growing up strong and finding mates of their own one day. And hopefully in years to come they too can return to start families on the Charles River as well!

Though it’s a tough loss, this papa swan will continue on with his little ones.

Papa Swan carrying his babies on his back 🥺❤️ @wbz @EsplanadeBoston pic.twitter.com/SqEQkKkV9s