“Piggy has the ability to detect when people are suffering and hiding it;” Emko, co-founder of Darwin Animal Doctors, an international organization that helps animals, said. “And he has the ability to bring that suppressed suffering out, so people can finally let go of it.”

Emko believes that Piggy’s past is what gave him the passion for helping people. Animal rescuers found Piggy in 2009 limping on a street in the Dominican Republic. Piggy was emaciated, covered in ticks and severely injured.

“He was hit by a car in the Dominican Republic at only a couple months old,” Emko said. “He was left dying without any veterinary care from his wounds for a whole month before a high-volume veterinary team visited from the U.S.”

The vet team had to amputate the dog’s leg to save his life and rid him of pain. Piggy never forgot what it is like to suffer, according to Emko and learned to recognize suffering in others.

Emko and his friend Andrea Gordon had just brought Piggy to New York City from the Dominican Republic, and Piggy was still learning how to get around on three legs. 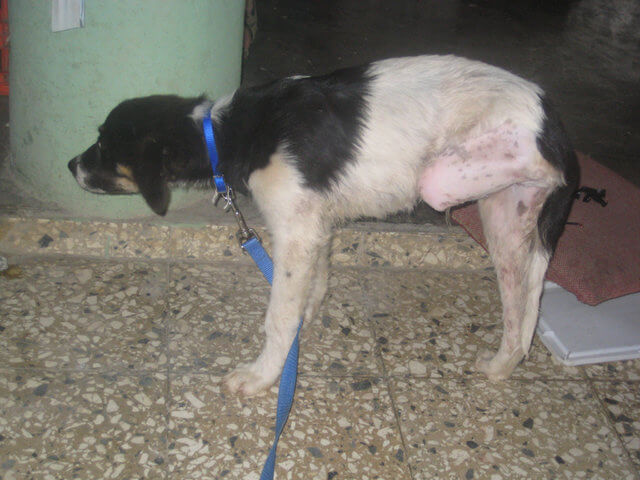 Emko watched while Piggy was chasing a squirrel, but Piggy surprised him by lying down in front of a man sitting on a park bench. That’s when Piggy placed his paw on the man’s shoe, and the man burst into tears. 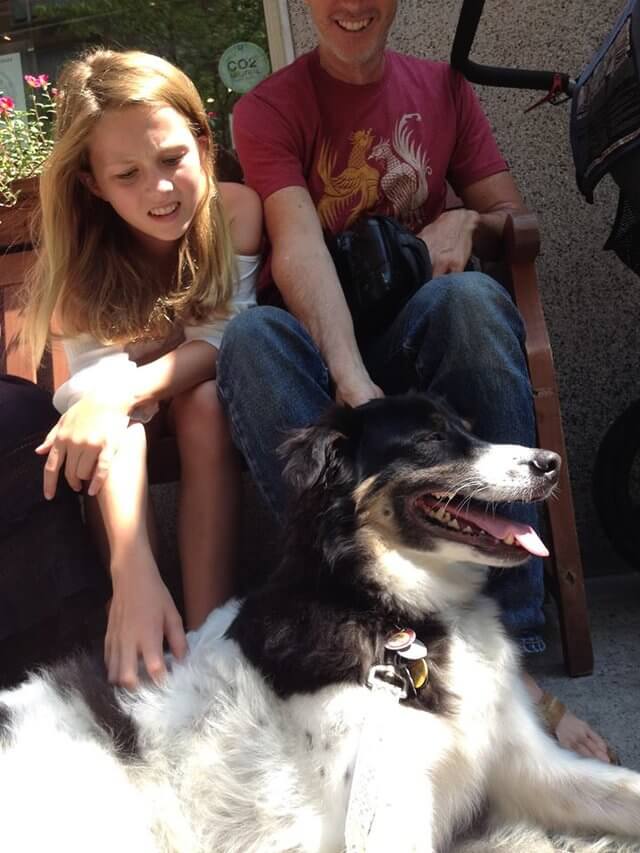 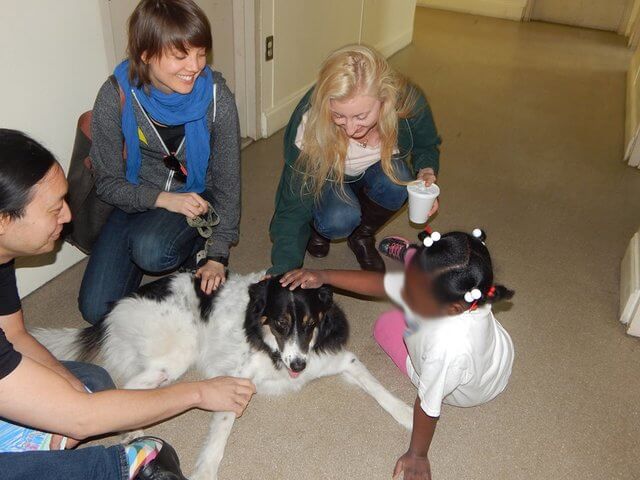 Piggy even does this when he’s out with a dog walker.

“There is one encounter that I will always think of when I think of how remarkable Piggy is,” Emko said. “One day Piggy was volunteering at iHOPE NYC for kids with severe brain injuries. And one girl we came across, the social workers said she had a huge fear of dogs. And she didn’t have much range of movement either, so do not expect her to interact with Piggy.” 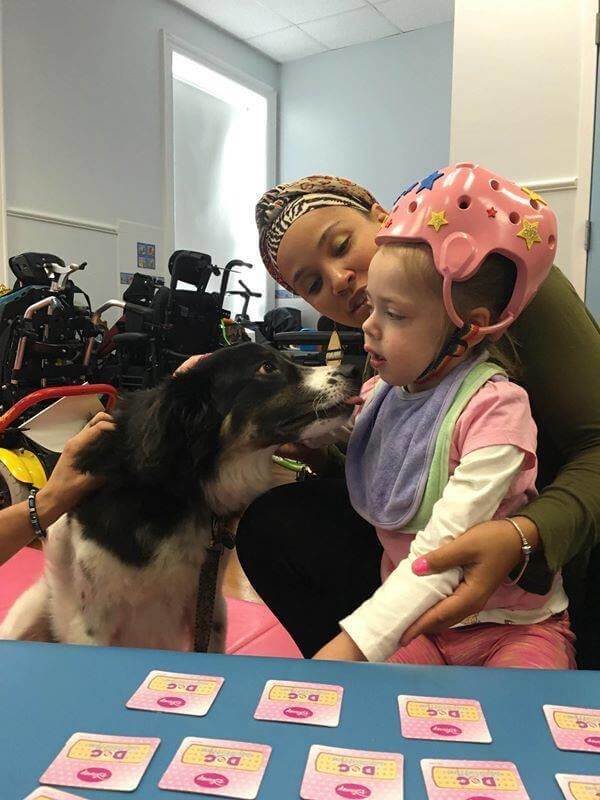 But when Piggy approached the little girl, something incredible happened.

“He looked at her, and she looked back,” Emko said. “And over the course of the day, she came closer. And she reached up with her arm in a brace and reached out, her arm unsteady but determined, and began petting Piggy’s fur, and she grew a huge smile. The social workers began crying, they could not believe that scene, for so many reasons.”

Piggy comforted an elderly neighbor with a leg injury.

“Piggy often stops and sits in front of her or our other neighbors as he passes their stoop; waiting to be petted,” Emko said. “But today, he already walked a long way, so he was tired, but as soon as he saw Sharon, he summoned the strength to hop up the stoop stairs one by one until he got to her, and then he laid his head on her leg.” 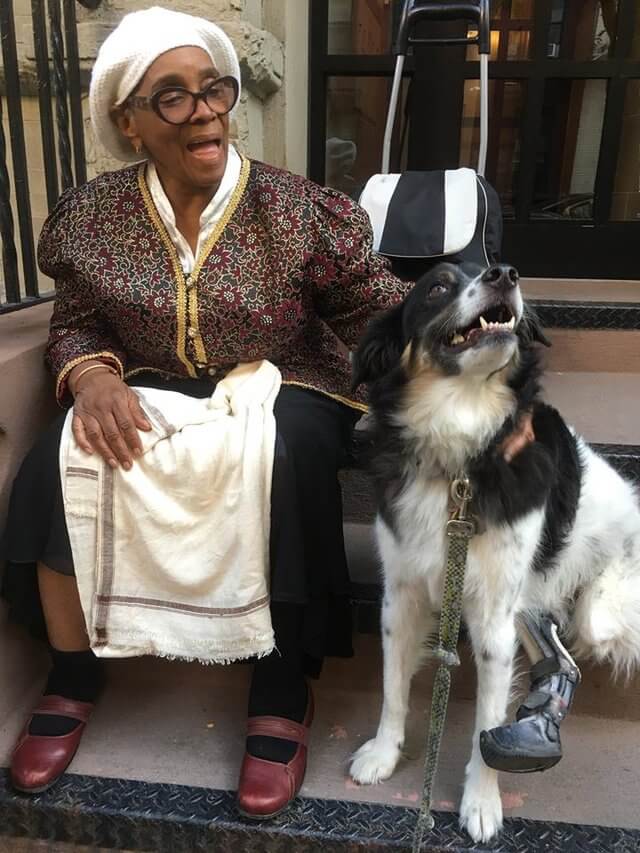 It turned out, Piggy seemed to have a good reason for climbing the stairs.

“Sharon told us that her leg was hurting her badly that day; to the point that she couldn’t walk even one block before doubling over to clutch her leg,” Emko said. “Piggy understood that feeling completely. He stayed with her. They kept looking into each other’s eyes, and her smile grew big before Piggy was ready to continue his walk.”

But it’s not just people who Piggy helps, he also senses when other animals need a friend.

“He recently refused to leave Central Park, pulling me off the trail again,” Emko said. “Strangely, he ran past crowds of adoring picnickers, who wanted to reach out to pet him as he passed. But he ran straight past them, and around a bush, and up to a small white fluffy dog. He proceeded to give her kisses all over, although she just stood without reacting at first.”

Emko asked the dog’s owner if her dog couldn’t see very well, he got an unexpected reply. 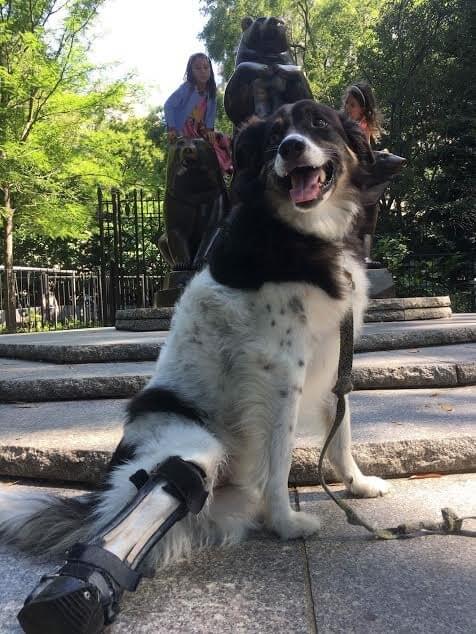 Emko thinks that Piggy has a superpower. But he truly believes that Piggy is just doing what dogs do best.

“Border collies and Aussie shepherds usually want a job to do — it’s how they are,” Emko said.

“Piggy is being the ultimate example of a dog. He’s looking for good to do and looking for lives to save or make better. And teaching us how we could do the same.”