Tuttle the turtle has been around longer than most, it’s likely  70 or so years old.  But she probably has never before experienced such human cruelty — or human kindness. 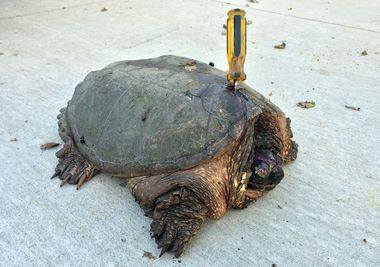 The common snapping turtle was discovered last fall laboring along outside the Illinois home of Paul and Diane Tuttle. It was immediately clear that she’d been the victim of a sickening attempt on her life; the would-be murder weapon — a screwdriver — was still protruding from her back. Upon closer look, it was revealed that Tuttle had also been stabbed in the head.

Despite those gruesome injuries inflicted upon her by some heartless person, the tough old turtle still refused to give up.

“It never snapped at us,” Paul Tuttle said. “It was calm.”